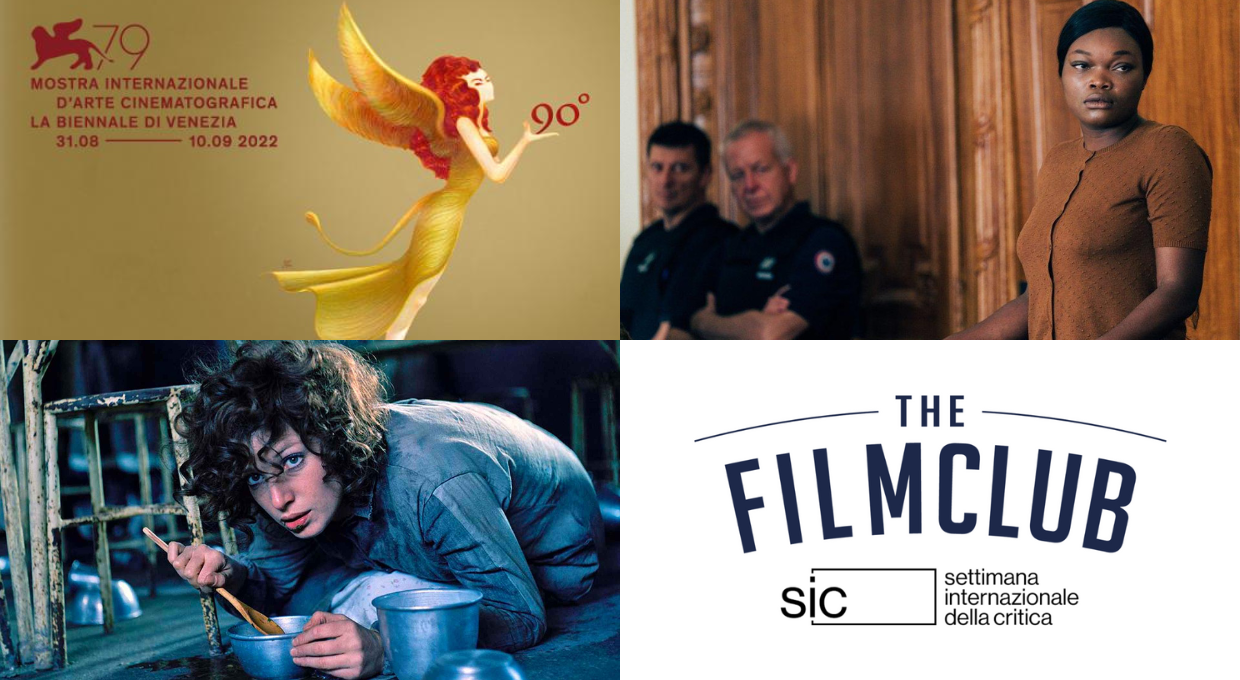 A film by ALICE DIOP

Court of Saint-Omer. The 30-year-old writer Rama witnesses the trial of Laurence Coly, a young woman accused of killing her 15-month-old daughter after leaving her on the shore of a beach in northern France. Rama intends to draw from the case a contemporary reinterpretation of the myth of Medea. But as the trial goes on, nothing is going as planned and the writer, who is four months pregnant, will find herself questioning every certainty about her motherhood.

In SAINT-OMER, Alice Diop confronts the unimaginable, placing us as close as possible to the defendant to examine the mystery of her actions with great sensitivity and intelligence. Cast: Kayije Kagame, Guslagie Malanga, Fatih Sahin.

An established French documentary filmmaker of Senegalese origins, Alice Diop made her debut in a fiction feature. Among her previous short films, Vers la Tendresse won the César Prize for Best Short Film.

A film by CARLO DI PALMA

A tribute to the unforgettable Monica Vitti in one of her most celebrated performances, Teresa la ladra, a film directed by her partner at the time, Carlo Di Palma. The restoration of the film was made in digital 4k by the Experimental Center of Cinematography-National Film Library from the negatives made available by Minerva Pictures. It will be screened in the Venice Classics section, which returns after two years of absence as part of the Venice Biennale International Film Festival.

Shot in 1973, Monica Vitti is Teresa, a widow and mother in constant search of new jobs, who is often forced to steal in order to survive. In the difficult historical period marked by the Second World War in Italy, the painful epic follows a fragile woman who will know the pain of prison, the loneliness of the asylum, and the impossibility of being reconciled with her own son. The cast also includes Stefano Satta Flores, Carlo Delle Piane, Michele Placido and Anna Bonaiuto.

The Film Club is the official partner of the 37th International Critics’ Week (SIC) and will grant, at the end of the festival, the audience award: The Film Club Award. The Film Club, which will be presented at the Lido di Venezia with a special event, with over 800 titles at launch, is the first Italian multichannel streaming platform that makes available to the Italian public an exclusive catalog of auteur and genre films, classic, cult, action, and rare, to watch without commercial interruptions, anywhere and anytime.

The Film Club’s initial offer includes the three channels Rarovideo Channel, Full Action and Minerva Classic. Soon, new channels will be presented that will further enrich the offer of an increasingly rich and varied catalog.

The Film Club is therefore a platform of great cinema and for great cinema, a project born from an idea of Gianluca Curti, CEO of Minerva Pictures, and from the work of the Digital Team of the company.

OFFICIAL SELECTION – OUT OF COMPETITION

A film by ENRICO GHEZZI and ALESSANDRO GAGLIARDO

A film produced by Matango with Rai Cinema and Istituti Luce – Cinecittà, in association with Minerva Pictures. With Aura Ghezzi and the voices of Adelchi Ghezzi, Enrico Ghezzi, and Toni Servillo.

The panorama of human affairs encounters the “man with a movie camera”. His playground has no boundaries, his curiosity no limits. Characters, situations and places pitch camp in the life of a humanity that is at once the viewer and the thing viewed. But what are the last days of this humanity? Have they already passed? Are they now or still to come? As they wait the astronauts of the Atalante, in their promethean dreams, meet their own image in a bubble of water. Along the passages of steamers in the open sea, a caress, a sign of affection. In the mirror, camera in hand, he checks himself, always uncertainly certain, his own capture inside that short, too short, unit of time. But what we have learnt is that nothing lasts. Everything that they touch turns into time, into action, expectation and hope, Demeter reminds bustling humanity. Fragment of fragments. To make a gesture that eludes melancholy and games in a downright impossible movement. Kraus’s theater on Mars has not yet opened, we were busy anarchiving. And this drama can have no other viewer but humanity.